Frisbie Moving & Storage Company was founded in 1930 by O.H. Frisbie. In 1963, Mr. Frisbie sold his interests in the company to a group of employees and became the President of Atlas Van Lines. On September 21, 2004 Mr. Frisbie passed away, leaving behind his long legacy in the moving industry.

The company continued to grow and prosper and in early 1970 added over 50,000 square feet to the existing 45,000 square foot warehouse and office facility. At the same time, garage facilities were built to maintain and service our growing fleet of vehicles operating coast to coast.

The economic and social challenges of the 60's and 70's were met by a sound management team continually striving for high quality. Training programs were developed to insure that skilled and conscientious movers provide customer oriented service. Diversification into office moving, commercial storage, and international relocations helped balance the seasonal aspect of domestic household moving and storage.

In 1972, Leonard See was elected President of Frisbie. Leonard has been with the company since 1960 and has served in all capacities within the organization. He has been active within the moving industry and is past President of the Michigan Movers and Warehousemen's Association. Not limiting his energies, Leonard is also involved with the Spirit of Detroit Association and is an active member in the Detroit Executives Associations.

In 1983, Frisbie expanded into the Ann Arbor market and in 1984 built a new 9200 square foot facility in Saginaw as well. This expansion increased our market coverage for better customer service and growth opportunities. In 1997 Frisbie proudly built a new 20,000 square foot office and warehouse in Ann Arbor, indicative of our long term commitment to this vibrant market.

In 1988, Frisbie Moving & Storage joined the United Van Lines agency family. This opportunity to be a part of the nation's largest mover of household goods, who also has a strong quality of service philosophy, has guided Frisbie into the twenty first century.

Does our van line affiliation impact our ability to service your relocation needs? We think it does. Frisbie both demands and rewards high quality performance. Such performance is delivered to our customers every day.

It’s true that most people choose to move during the summer, whether it’s by choice or because of scheduling necessities. In fact, the nation’s peak season for moving starts... 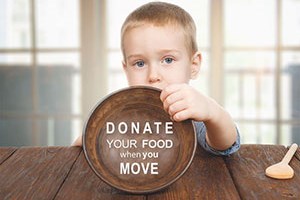 We Proudly Support Move for Hunger

Moving? Set aside your unopened, non-perishable food items and our crew will pack up your food and deliver it to the local food pantry.

We Proudly Support Move for Hunger